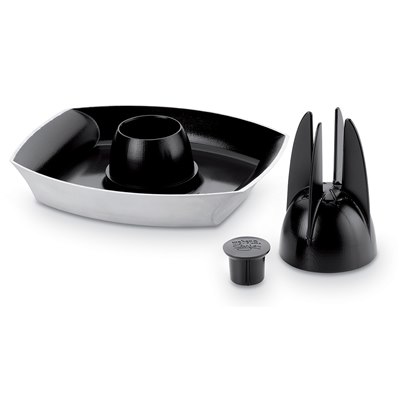 Create the ultimate roast chicken on your barbecue with this fantastic accessory from Weber. The central chamber of the Weber Style Poultry Infusion Roaster is hollow to allow you to pour beer (or any other liquid) into it. With a chicken placed over this central section, the heat of the barbecue cooks the chicken from the outside, while the steam generated from the liquid steams from the inside, giving you chicken that's amazingly crisp on the outside and meltingly tender on this inside. The bottoms of the pan is solid, allowing you to catch all the juices from cooking to be used in a gravy. The base pan can also be used for cooking in its own right, with nachos and brownies amongst the many recipes possible.

Weber say, Prepare a crispy yet moist chicken with the subtle flavours that are only produced by beer, juice or wine. The Deluxe Poultry Roaster holds liquid that fills your poultry with flavour and has a cap to lock in the steam, while the base captures juices for basting. After the plates have been cleared and stomachs are full, the ceramic non-stick coating makes cleaning easy.

Achieve the next-level beer chicken dinner. Or, serve up nachos with salsa in the centre cup straight from the barbecue. The versatile Deluxe Poultry Roaster holds chicken upright over an integrated cup – perfect for filling with your favourite juice, wine, beer, and spices. As the liquid in the roaster heats up, steam infuses your meat with luscious flavour, and the base captures juices for basting or cooking soups and gravy. Use the included cap to lock in the steam. You can also load the base with potatoes or vegetables, and as the meat cooks, its juices saturate your side dish below it. As durable as it is good-looking and functional, the ceramic-coated Deluxe Poultry Roaster is non-stick and dishwasher safe, so that after dinner you can focus not on cleaning, but on the people who matter most.